There’s small cars, and there’s micro cars, and those that sort of slot in between. Kia’s Picanto is a small car that defies its external size to offer a well packaged and uncommonly roomy interior, all the while looking like it would fit into the tray of a four wheel drive ute. A Wheel Thing explores the funky 2017 Kia Picanto, priced at (at the time of writing), $16230 driveaway with metallic paint (Pop Orange on the test vehicle).

And when AWT says Picanto, it means Picanto. To paraphrase Chief Engineer Scott from Star Trek:The Next Generation’s brilliant episode “Relics”: “There’s no bloody S, no bloody Si, no bloody GT Line”. What you get is a single trim level, a 1.25 litre four, a five speed manual or archaic four speed auto, which is what the test car was fitted with. The little engine that could delivers 66 kilowatts at 6000 rpm and 122 Nm which peaks at 4000 rpm. 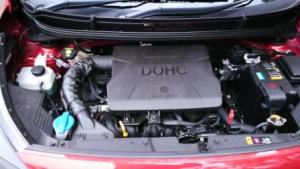 The fuel thimble holds just 35 litres however fuel consumption for the auto is rated at 5.8L/100 km for a combined cycle. As it’s a city car in intent, figure on 7.9L/100 km around town. If you do decide to drive outside of the big city, it’s rated for 4.9L/100 km. That’s from a dry weight of five kilos under the tonne. AWT finished on 6.6L/100 km in a mainly city environment and generally with one aboard.

We said it was small. How does 3595 mm long, 1595 mm wide, 1485 mm tall, and a huge (relatively 2400 mm) wheelbase sound? Sounds horrible, right? But it’s that wheelbase increase (up slightly from the previous model) that provides ample legroom up front, enough for reasonable comfort for two adults in the back, and enough shoulder and head room for four without constant body contact. There’s even enough room to slide in 255L of cargo space with the comfortable rear pews up. 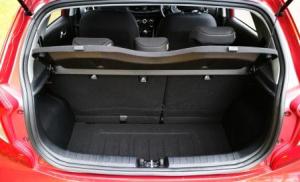 What’s not small is the ability of the Picanto to deal with varying driving conditions, thanks to the brilliantly Australianised specification for the suspension. Kia’s engineers have tweaked the McPherson strut front and coupled torsion beam rear even further, and what is delivered is nothing short of surprising. It’s fair to expect a small car, riding on 175/65/14 rubber (wrapping steel wheels with alloy look wheel covers) from Nexen, to hop/jump/skip around on anything other than billiard table flat surfaces.

Nope. You’ll get a car that’s composed, unflustered, sometimes even displaying indifference to broken or breaking up surfaces. Toss the little machine into a long flowing curve and there’s a subtle shift of balance as the car resettles. It’s nimble, adept, and sure footed.

There is a bit of crash from the front as you roll over the damnable shopping centre speed humps, but there’s no ongoing motion, simply an acknowledgement of a minor irritant. The electrically assisted steering and overall size play a major part in making this environment easy and liveable to deal with, as is moving it around on the tarmac. A smooth and fluid transition from lane to lane is also what this Picanto will deliver. Like most cars of this size, it will understeer when pushed hard, scrubbing the tyres, but really only in tightening corners and when taking advantage of the chassis dynamics. 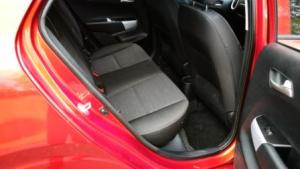 If there’s a downside to the driving experience, it’s fingers pointed at the transmission. No, not because it’s harsh, unforgiving, stuttery as it’s completely the opposite in being smooth, quiet, responsive. It’s the number four. As in ratios. As much of not being a fan of CVT as A Wheel Thing is, the small torque output would be ideally suited to one of them. A further option to explore would be to look at what niche small car maker Suzuki has done. They’ve engineered some pokey small capacity turbo engines and have bolted them to six speed autos. Straight up it improves the driveability of the car, the usefullness of the engine and by having the extra ratios, economy hovers around the 6.0L/100 km mark.

A noticeable feature or two of the Picanto’s interior is the resemblance to a couple of icons. One is the cluster that holds the dial based aircon controls, looking like a controller from a games console from Japan. The other is the broad sweep of the dash that terminates at either end with two air vents that bears more than a passing resemblance to a 1950s Cadillac’s tail.

The trim itself is a mix of textured black plastic, alloy look highlights, and splashes of piano black around the touchscreen. The cloth trim has a subtle charcoal and light grey trim and complements the roof lining’s grey shade. The rear cargo space is trimmed with the standard hard wearing carpet and leads to a space saving spare. Storage inside is adequate with two cup holders in the centre, bottle holders for the doors, and there’s even a coat hook in the rear.

The outside lifts the Picanto onto another level, with a striking sweep to the headlights, a determined and assertive font design, a pert and tight rear and in profile shows all four wheels pushed as far as practically possible to the corners. There’s potential in the exterior design, potential…..

Naturally there’s six airbags, driver aids in the form of stability managements, hill start assist and the like, 2 ISOFIX child seat mounts, plus the standard seven year warranty and capped price servicing for seven years. Maximum cost is at the four year or 60000 kilometre mark, with a current scheduled price of $493.

At The End Of The Drive.
A Wheel Thing sees potential above what the Picanto already delivers. It has the potential to become a cult classic car thanks to the fabulous chassis underneath, funky and eyecatching looks, and simply needs a more sporty engine and transmission combination, and a mild fettling of the body, to be a cult classic city car. Head over to Kia Australia’s Picanto to check it out for yourself.