It’s a hearty “welcome back” from A Wheel Thing to Nissan and what a vehicle to get things up and running. The grunty and luxuriously appointed 2017 Nissan Navara ST-X dual cab ute graced the driveway for a week. 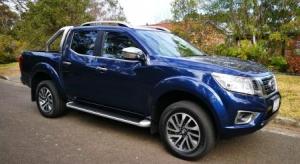 The heartbeat of the Navara dual cab range is the immensely flexible and torquey 2.3 litre diesel available across the range. Depending on which specification you buy you’ll have either a 120 kW or 140 kW variant, such as the ST-X does, but you’ll also get either 403 Nm or 450 Nm between 1500-2500. It tapers off gently from that peak and acceleration in a rolling situation is stupendous. It’s geared to sit at around 1800 rpm or so for the highway and when required, will spin easily through the rev range and get you towards the horizon rapidly.  You’ll never feel as if the engine is going to run out of urge and with the (optional, as fitted) seven speed auto, it’s a seamless, ongoing, never ending wave with only the flick of the tacho really giving you any indication of what’s happening underneath. 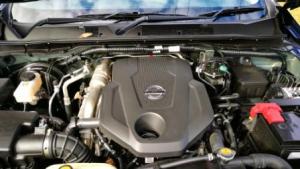 What’s even more startling about the performance is the bulk the engine must pull around. Kerb weight is just thirty kilos shy of two tonnes, and Nissan quotes a gross mass of 2.9 tonnes. However, such is the all-round ability of the engine and driveline you’d not know of the weight. To top the icing with a cherry is the fuel economy from the sizable 80 litre tank. Nissan quotes 7.0L/100 kilometres on the combined cycle, AWT finished just north of that at 8.1L/100. 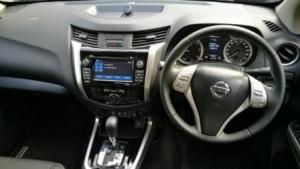 The transmission in the ST-X is a high and low range four wheel drive capable setup, tied to the seven speed auto. Capable being the operative word here as low range mud eating is a doddle. All but one Navara dual cab variant (the RX) has a leaf spring rear, with the others being loaded up with an S-Link rear. Combined with the standard double wishbone front, the ST-X will crawl over and through just about any surface in high and low four wheel drive. The low gear ratios allow the engine to provide peak torque during the drive, ensuring the engine is on song during off road excursions. 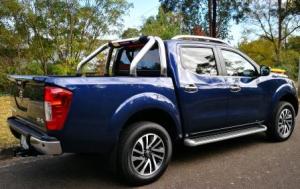 On tarmac ride quality is pretty damned good too. It’s a touch more taut at the rear but is tied down, compliant and only occasionally jiggly. Thanks to the tough suspension requirements it’s flat, composed, irons out most irregularities but there’s a dark side. At anything other than walking pace it’ll nose wide in corners. There’s no lack of grip as such, just a propensity for the front end’s steering to not be quite as tightly wound as perhaps it should be. Otherwise it’s a ride that you can live with, and enjoy. Highway and freeway dips and rises feel as if they have the ST-X as part of the surface, as there’s no discernible suspension travel, rather a sensation of following the curvatures. There’s some free play in the steering for cornering at speed, with load felt just slightly off centre. 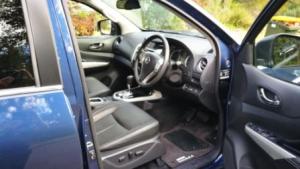 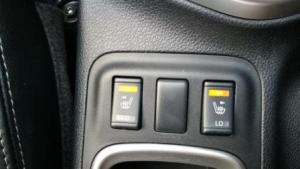 Enjoy it you can whilst sitting in the cabin. ST-X has a nickname: “ute in a suit”; there’s leather seats front and rear, with heating for the front. Great in winter but no ventilation on leather seats during an Aussie summer is not a good idea…and there are times where cloth is preferred such as a cold morning. Oddly, for a top of the range vehicle, only the driver’s window has an auto or one touch Up/Down as well. There’s a leather trimmed tiller, plenty of storage nooks including a tray in the top of the dash (with 12V socket), and chromed and bronzed silver accented highlights throughout. 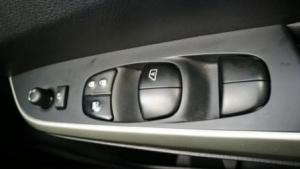 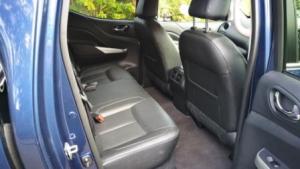 The dash dials are clean to read and separated by a colour info screen, the touchscreen and associated buttons are ergonomically friendly, there’s plugs for the audio and 12V accessories , and a simple to use dial for the four wheel drive system. You’ll have Bluetooth phone and streaming compatibility, a single CD player, plus cruise control. Safety comes in the form of the electronic aids such as Hill Start Assist, Hill Descent Control, seven airbags including driver’s knee, and seatbelt pre-tensioning, making the Navara ST-X as safe as possible. 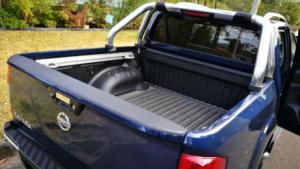 There’s ample room front and rear for the family, for head and shoulders and, importantly, leg room. What you don’t get room for, which the ST-X has in common with every vehicle of its type, is room for shopping. Yes, you do have a tray that will excel at holding tools or whitegoods or hardware, but utes aren’t really ideal for family shopping…unless you’re a family of one and your shopping is tinned food and liquid refreshment. 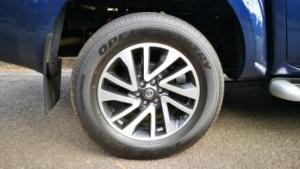 But little of that will count when you drive the ST-X. It’s an imposing beast, with an overall length of 5255 mm, stands at 1840 mm sans roof rails and will spread itself across 1850 mm. The wheelbase is a decent 3150 mm, one of the bigger wheelbases around, and contributes to the straight line stability of the vehicle. There’s decent front and rear overhangs too, allowing approach and departure angles of over 32 and 26 degrees when off roading. And underneath, the chassis is designed to work with the engine and transmission to allow up to 3500 kilograms worth of towing with a brake equipped trailer. 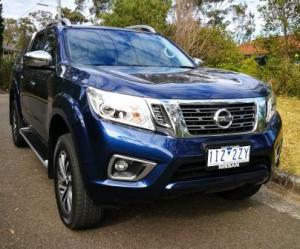 Looks wise the Navara range for 2017 has been sharpened up a little; the front end is more angular, more asserrtive. There’s side steps on the ST-X, and meaty Toyo A25 255/60/18 rubber on either end. There’s a reverse camera integrated into the tail gate handle as well, linking to the touchscreen inside and provides a high definition image. There’s roof rails, a chromed roll bar mounted over the tray, a polyurethane tub lining, tie down points, which makes the overall presence high on the assertive “I’ll take this chair, mate”. 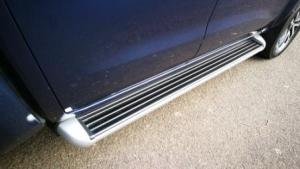 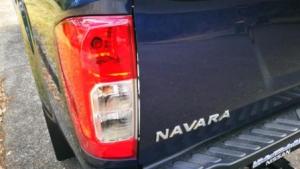 At The End Of The Drive.
The Navara nameplate has always been a strong performer for Nissan. And even with the rise of the SUV the Navara continues to make an impact on a tough market. With competition from Volkswagen (Amarok), Mitsubishi (Triton), Ford (Ranger), Holden (Colorado), Isuzu (D-Max), just to name a few, the Navara has held onto a good market share. The ST-X especially is one that is worthy of looking at as a top of the ladder entry. As a work ute, it’s well and truly suitable, especially for areas that require a dedicated four wheel drive system. Wear a suit? Just as capable.

As a daily driver, the willing engine, smooth gearbox, and sheer driveability make it a no brainer. It’s compliant, comfortable, easy to move around despite the size and certainly has one of the more responsive throttles around. The 2017 Nissan Navara ST-X is certainly a solid contender in a very crowded market place.Check out the details of the range here: 2017 Nissan Navara dual cab range