There’s plenty of goodness leaving the factories that build Jeep vehicles: there’s a new Wrangler, a new Cherokee, a top of the range Grand Cherokee called the Trackhawk, and a new Compass. It literally is an automotive version of “After the famine, the feast.”

Compass.
Built in four factories based around the globe, the 2018 Jeep Compass will be available in four trim levels. We’ll see the Sport, Longitude, Limited, and Trailhawk, with the latter the first time it’s been available as a Compass. Naturally there’ll be 4×2 and 4×4 versions, with both diesel and petrol engines under the bonnet. Thankfully Jeep has resisted the urge to go fully auto and will continue to offer manual transmissions. 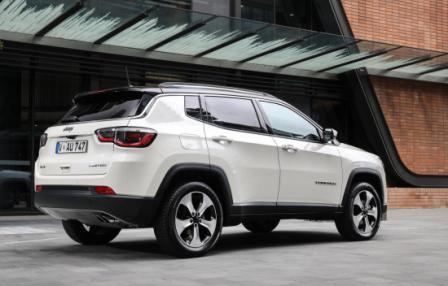 The Compass Sport will have the 2.4L petrol engine, pumping out 129kW, and will be available with either manual or auto. Standard equipment includes seven airbags, reverse camera, leather wrapped steering wheel, five inch touchscreen and DAB radio.

Next up is the Limited, adding the choice of a 2.0L diesel and nine speed auto for either diesel or petrol, 4WD as standard which includes Jeep’s Selec-Trac off-road modes. The 8.4 inch screen will be standard along with a Beats Audio sound system. the driver will see a 7 inch full colour dash screen and sit in a eight way powered seat, and can option up a full extra suite of safety such as Adaptive Cruise Control and Blind Spot Monitoring.

For the first time in the Compass range, the Trailhawk name is added. By driving some of the planet’s toughest off-road tracks, the Trailhawk gets the Trail Rated badge. It also means that the Selec-Trac drive mode setup gets Rock mode, allowing the 2.0L diesel and nine speed auto to combine with the proven off-road ability to allow a driver to go almost anywhere. A dual pane sunroof can be optioned at $1950 and a $2850 Comfort and Convenience pack can be ordered as well. Prices for the Compass start at a manufacturer’s list price of $28,850.

Wrangler.
New, yet comfortingly familiar, the 2018 Jeep Wrangler stays true to its visual heritage with the familiar seven bar grille, round headlights, and squared off tail lights. Underneath the Wrangler loads up with either a 2.0L turbo four, 3.0L V6 diesel, or 3.6L V6 which has been upgraded for 2018. The off-road credentials are there too, with Select-Trac, Command-Trac, and Rock-Trac 4×4 systems, and a wading depth of thirty inches. That’s two and a half feet for the more metric minded.

There’s three models in the two door Wrangler range: Sport, Sport S, and Rubicon, with the four door Wrangler slotting in the Sahara between Sport S and Rubicon. Jeep says: for the first time in Wrangler’s history, a two-speed transfer case with full-time four-wheel drive and a 2.72:1 low-range gear ratio that is available on Sahara models. This new Selec-Trac full-time two-speed transfer case is intuitive and allows the driver to set it and forget it, while constantly sending power to the front and rear wheels. 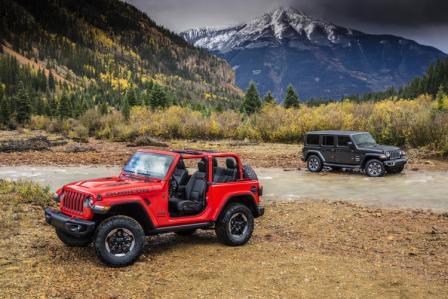 The Wrangler also gets class leading off-road dynamics, with an approach angle of 44 degrees, departure angle of 37 degrees, and breakover of 27.8 degrees.

Pricing wasn’t available however FCA US has invested over $3.5 billion to realign and streamline its North American manufacturing facilities.

Grand Cherokee Trackhawk.
It’s the most powerful SUV of its kind, with a monstrous 6.2L supercharged V8 up front. Peak power is 522kW and maximum torque is an astounding 868Nm. It’ll see one hundred kilometres per hour in a Tesla frightening 3.7 seconds and will be priced from $134,900 (manufacturer’s list price). Transmission is an eight speed auto, with Brembo brakes hauling the machine down to 0 km/h from 100 km/h in just 37 metres. top speed? 289 km/h.

There’s plenty of standard kit on board such as the Quadra-Trac all wheel drive system, with standard infotainment features including the latest generation Uconnect 4 system with an easy-to- use 8.4-inch high-resolution touchscreen enabling navigation, Bluetooth and Performance Pages (which displays lap times and instant readouts for power and torque outputs) and pinch-and-zoom capability. The Uconnect 4 system can also run both Apple CarPlay and Android Auto.

There’s an economy price to pay for the drive. 16.6L per 100 kilometres driven on a combined cycle.

Cherokee.
More information about the four model 2018 Jeep Cherokee range will be made available in January 2018. There’s been refinement to the exterior and an overhaul of the interior. So far, it’s looking great. 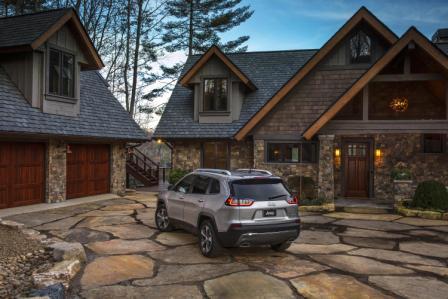