What you do get is the standard 1.25L petrol fed four, a four speed auto, 62 kilowatts and 122 torques at 4000 rpm. Fuel economy is, naturally, great at 5.8L/100 km of normal unleaded for the combined cycle from its 35L thimble. Consider, too, a dry weight of 995 kilos before passengers etc. Kia’s rationalised the Picanto range to a simple two model choice, the S and the GT-Line. If you’re after a manual the S is the only choice. Price for the GT-Line is super keen at $17,290. Metallic paint is a further $520, taking the test car’s price to $17,810.

It’s a squarish, boxy, yet not unappealing design, especially when clad in the silver grey the test car has. Called Titanium Silver it’s more of a gunmetal grey hue, and highlighted by red stripes at the bottom of the doors, red rimmed grilles for the airvents and the lower section is splashed with silver around the globe driving lights. The grille itself is full black and the angle of the grille combines with the laid back styling of the headlights (with LED driving lights) to provide an almost Stormtrooper look. At the rear the neon light look tail lights complements the twin pipe exhaust. It’s a cool and funky look. 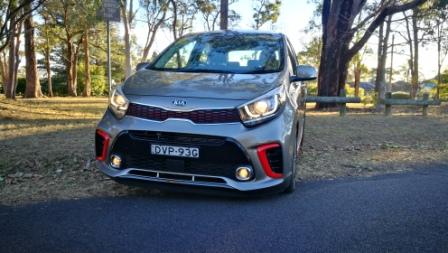 Kia has upped the 14 inch alloys to classy looking eight spoke 16 inchers. Rubber is from Nexen and are 195/45. As a package they look fantastic. Going further is the grip level. For a vehicle that’s a long way off from being a sports car it has some of the most tenacious grip you’ll find under $30K. AWT’s Blue Mountains lair is close to some truly good roads for handling and ride testing. On one particular road, a specific one lane and one direction (downhill) road, the slightly too light steering nevertheless responds to input cleanly and succinctly. Cramming a 2400mm wheelbase inside an overall length of 3595mm helps, as does the low centre of gravity. It’s a throttle steerer too; come into a turn and back off, let the car make its own way and feel the nose run slightly wide. Throttle up and the nose settles, straightens, and all is good with the world. Body roll is negligible and direction changes are executed quickly, Braking from the 254mm and 236mm front and rear discs is rapid, stable, and quick.

Ride quality from the Macpherson strut front and torsion beam rear is delightful for the most part. It does lend towards the taut and tight side and that could also be attributed to the lower profile rubber. Yet it’s never uncomfortable in normal and everyday usage. Hit some ruts or ripples and it’s here that the Picanto GL-Line gets flustered. The short travel suspension will kick back at the chassis and the car will, momentarily, become unsettled. On the flat it’s composed and will provide a comfortable enough ride but with any undulations may get a little choppy thanks to the short wheelbase.

It’s on overtaking or uphill climbs that the drive-line shows its Achilles heel. Kia seems to be the only car maker that has stayed with a transmission so archaic and out of step with the industry. For both versions of the Picanto, as much as many loath them, a CVT would be a better option. For the GT-Line, and emphasis on the GT, a turbo engine such as those found in the Suzuki range or even Kia’s own tech would be a better option. Although our test drive finished on a commendable 6.6L/100 km, an extra cog or two would help that and make the Picanto a far more enjoyable car to drive. 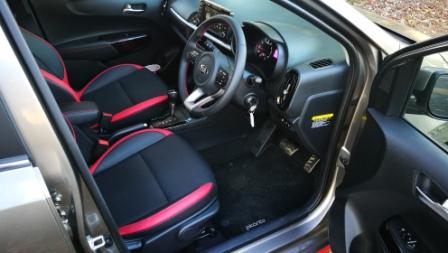 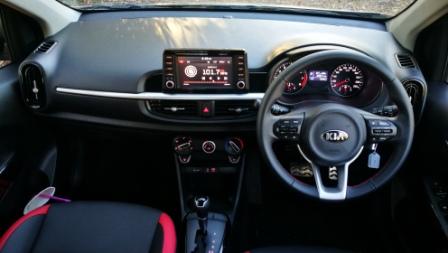 Inside, too, could do with a lift. Although there’s piano black door inserts with hints of red striping, and red highlights on the driver and passenger seats, the rest of the cabin, complete with Cadillac tail-light inspired air vents, lacks real cache compared to the opposition. Considering its size there’s adequate room up front, barely enough for the rear seats, and a 255L cargo space over a space saver tyre that’s fine for two people shopping wise. All good however the standard all black theme would greatly benefit from strategically placed dabs of colour.

However, there’s an Audi style touchscreen mounted on the upper dash edge. Android Auto and Apple CarPlay are on board but satnav isn’t, meaning you’ll need the smartphone connection for guidance. It’s AM/FM only, so misses out on DAB. The 7 inch screen is clean and user friendly, as is the driver’s view. Simple and unfussed designs work best and here Kia has nailed that. Two dials, speed, engine revs, fuel level and engine temperature. Simple. A centred monochrome info screen with information made available via tabs on the steering wheel. Simple. 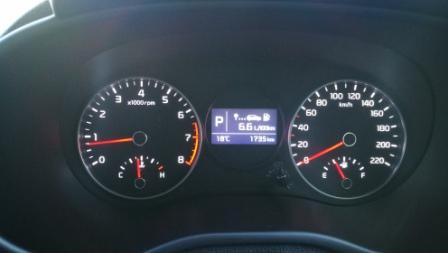 Small in size the Picanto GT-Line may be but it doesn’t lack for tech. AEB or Autonomous Emergency Braking is standard, as are Euro style flashing tail lights for the ESS or Emergency Stop Signal. Add in six airbags, vehicle stability management, Forward Collision Warning, and it’s pretty well covered. It does miss out on Blind Spot Alert and Rear Cross Traffic Alert though, but rear sensors are on board. This is all backed by Kia’s standard seven year warranty and fixed price servicing that will cost just $2552 over seven years.

At The End Of The Drive.
The Kia Picanto and the Kia Picanto GT-Line represent astounding value. Consider a RRP of $17,810 plus on roads, a decent set of safety features, and that could be better than it is fuel economy, and it’s a walk up start for anyone looking for a city car that’s a good looker, a sweet handler, and will have enough room for a average shop for one or two people. Our shop for four filled the boot and required only a bag or two to be relocated to the back seat.

Kia’s Picanto is a very good car, but a real need for change in the engine and transmission would make it better. Yes, it’s economical but could be better. Drive one and make up your own mind or have a look here 2018 Kia Picanto info to find out more.