Kia’s once large sedan contender has been overshadowed by the Stinger, itself an excellent and vastly underrated vehicle. The Optima, though, remains the hidden gem in the bigger sedan family and the updated 2019 Kia Optima Si still impresses. The test car provided comes at a cost of $33,390, paint at $595 for premium paint, making the test car $33,985 plus on-roads. 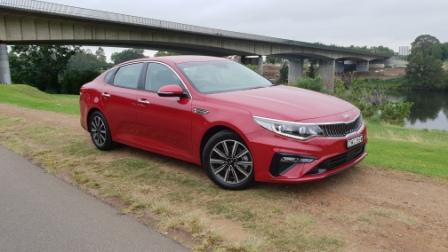 Power comes courtesy of a naturally aspirated 2.4L four for the Si or a turbocharged 2.0L four for the GT. Peak power is 138kW at 6000rpm, with peak torque a reasonable 241Nm. That comes in at 4000rpm, with a steady curve to there from idle. Powering the front wheels via a six speed auto that’s been slightly recalibrated for 2019, Kia quotes a combined fuel economy figure of 8.3L/100km from the 70 litre tank inside the 1540kg (dry) Optima. 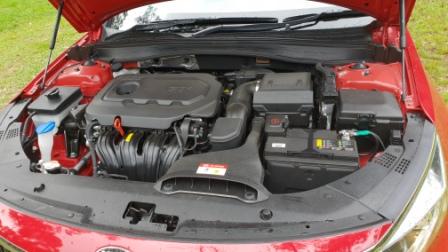 Rubber is from Continental, with Kia specifying their ContiPremiumContact5 at 215/55/17. It’s a grippy choice, with the front driven Optima making good use of the tyre’s adhesion. During the week’s review period, Sydney had both summer and winter driving conditions. The Continental rubber powered through both with equal levels of confidence. They also coped with the Si’s propensity to torque steer, an unusual sensation in an age where that quirk of front-wheel-drive cars is almost non-existent.

Suspension is the proven combination of MacPherson struts up front and a multi-link rear. The suspension has been massaged for the 2019 Optima, with the dampers erring towards the sporting side, a choice that sporting drivers will enjoy. Others may find that a little too severe. Indeed, on Sydney’s mix of unsettled and undulating roads as opposed to the new and smooth tarmac found in roadworks, the Optima Si had no issue in equalising both into a comfortable and composed ride. The only time AWT semi-wished for a softer setup was over the bedamned shopping centre and local residence speed restrictors.

The setup provides a nimble and communicative chassis.  Steering input is received and processed quickly, with rapid changes of direction. Body roll is minimal, and the overall feel of the body is one of connection, not isolation from the road and its varying conditions. The steering is also relatively free from bump-steer.

Overall drive response is perhaps also not for those that aren’t of a sporting bent. The throttle response is virtually instant, with a “light-switch” feel. Tap the accelerator pedal and the engine engages instantly; go off, and it responds by damping down the revs quickly. It does take a bit of practice to get the smooth and progressive acceleration less responsive systems have. It’s a free revving engine, too, eagerly spinning around and bringing with it a steady rate of urge. It’s a tad buzzy past 4000rpm but that’s a rarity in seeing those numbers in normal driving. The transmission is a simply gorgeous piece of engineering, with invisible, seamless, changes. There’s no real sense of transition between ratios at all, with zero forward and back bodily movement as the cogs swap quietly and efficiently.

Kia’s efficiency in packaging is in abundance in the Optima Si. Inside the 4855mm overall length, (yep, just 8.4 centimetres shorter than a VF Commodore) is a 2805mm wheelbase. That’s just eleven centimetres shorter than the Commodore’s.  This equates to ample leg room front and rear, a luggage space of 450L (SAE measurement, 510L VDA and complete with full sized spare), and 1475mm shoulder room up front. Rear seat passengers have 1432mm shoulder room and 904mm leg room.

The Si has manually adjusted seats up front, with the driver getting a two position lumbar support seat. Cloth is the material of choice all round in the Si and all seats are comfortable enough to have passengers egress after a long drive feeling fine. Kia’s worked hard to make sure the cabin is a good place to be, and the quality of the fit and finish is testament to this. The trim is black, with a leather look texture, and there are subdued uses of an alloy hued plastic. The Optima has the almost standard arch sweep at the upper edge of the dash., joining in one fluid line both sides of the cabin.

Switch-gear is typically clinical Kia in layout and look. The touchscreen in the Si is a seven inch unit, the GT gets an eight inch setup. Audio is AM/FM only with no DAB tuner fitted to both. The Si also misses out on satnav. However there is Android Auto and Apple CarPlay with voice recognition, backed by Bluetooth streaming and the usual USB/Aux inputs. There are four cup holders and four bottle holders, map pockets, and back of seat pockets. Rear seat passengers also have a pair of charging sockets and air vents.

The exterior received a mild refresh in 2018. The Schreyer grille now has an almost Maserati look to it, and the lower front bumper has been reprofiled with the lower intake now more angled in towards the corners towards deep-set cornering lights. The familiar angled headlights retain their LED driving lights and commence a long, sweeping, line to join the rear non-LED lights in the Si. The GT has LEDs here. The profile is a handsome coupe style and the test car came clad in Temptation Red.

Safety is naturally of a high level with a five star rating. Lane Keep Assist and Autonomous Emergency Braking are standard, with the Si not receiving Rear Cross Traffic Alert. Dusk sensing headlights are standard, as are a pair of ISOFIX seat mounts. There are six airbags and the usual mandated safety equipment levels. Parking sensors front and rear take the edge off any parking problems in those tight shopping centre carparks. 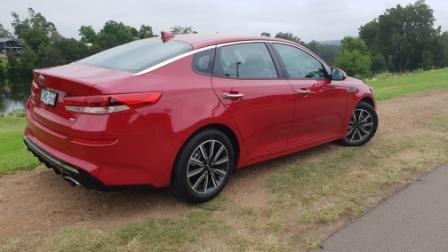 The seven year warranty is standard and Kia has a seven year fixed price servicing structure, with 15,000 kilometre or one year intervals. Year one/15,000 kilometres comes in at $289, with year four the most expensive at $559.

At The End Of The Drive.
The 2019 Kia Optima Si slides unhappily, it seems, into that niche of very good cars that are largely ignored by the buying public. Sedans on the whole are a class of car that were once loved but now sit, licking their wounds from an SUV mauling, in the shadows. The Optima itself, a handsome looker, a good drive, and well equipped, suffers from a number of factors in not having the sizeable presence it once had.