This Car Review Is About: The 2019/2020 Tesla Model 3. In August 2019 Tesla Australia released the Model 3 for local consumption. It’s a pared back Model S, in the sense that there’s a strong family resemblance to the sedan, however some of the features are deliberately lower key. That doesn’t mean that they’re of lesser value in usage.

What Does It Cost?: The car supplied has a starting price of $66,000. Deep Blue Metallic Paint is $1,400. The full self driving capability package is $8,500. With other charges such as government and dealership fees, the final price was $81,165.

Under The Bonnet Is: A choice of two drivelines to choose from, being the Standard Plus Performance. Simply put, the Standard has a battery better suited for city or short distance country driving. A full 100% charge offers a mooted 460 kilometres which of course is condition and driver dependent. The car provided was fitted with a rear wheel drive setup, as opposed to the Performance with a dual motor option. Suspension is double wishbone up front, and fitted with a virtual steer axis front suspension with coil over twin-tube shock absorbers and stabilizer bar. The rear is fully independent multi-link rear suspension with twin-tube shock absorbers and stabilizer bar. Steering is handled by a variable ratio and speed sensitive electronic power steering. 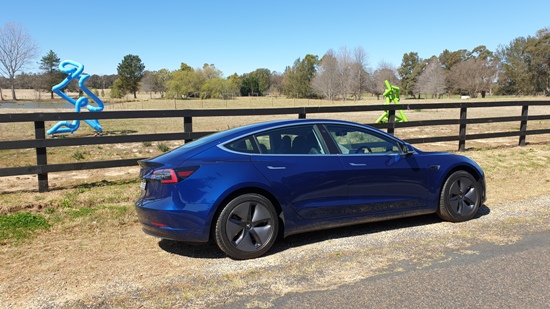 On The Outside It’s: As mentioned, there is more than a passing resemblance to the larger Model S. The profile is similar, with the windowline almost identical, but the boot is stubbier with a small integrated lip spoiler. Also, the tail lights look the same. The main difference is up front. It’s not impossible to think Porsche when gazing upon the nose as the design, especially around the LED headlights, look very Germanic. Rubber is from Michelin in Pilot Sport specification and are 235/45/ZR18 on charcoal aero alloys. 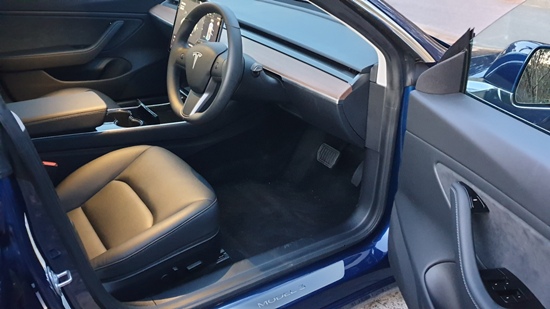 One of the notable changes is in respect to the door opening mechanism. There’s no self opening, and no interior door handles. These have been replaced by small touch tabs. The exterior handles are L shaped in a horizontal design, and work by pressing the rear which levers out the longer part of the L and simultaneously drops the window slightly. The boot lid is fully manual in operation also. 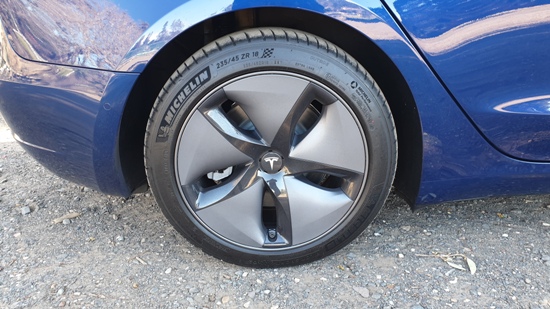 On the Inside It’s: A bigger difference. There is no “traditional” looking dash as in a driver’s binnacle. Everything is controlled via a landscape oriented touchscreen that is centrally mounted. Even the glovebox is opened via the screen. 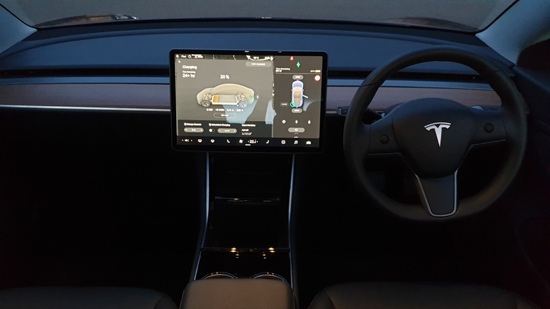 Behind this, in the test car, was a single sheet of wood stretching across the full width and it sits atop a subtle full width slot that houses the main airvents. Beyond that is the speaker bar and that sits at the base of the windscreen. It’s minimalistic, uncluttered, classy, and not to everyone’s tastes.

Above the passengers is a deeply tinted full glass roof, with front and rear separated by a dividing roll protection bar that’s been tested to withstand a force of a couple of tonnes. Drive is engaged via a lever on the right side of the powered steering column, with indicators and wipers on the left. Park is engaged by pressing a button on the right stalk’s end. The indicators have a three blink mode, or when pressed more firmly, will stay on until the driver manually disengages them when changing lanes. Having the three blink option isn’t one we support as it leads to lazy driving habits. The tiller is standard in look, bar two roller switches in the arm. These also can be moved slightly left and right when, for example, adjusting the powered mirrors for position, or changing audio stations. 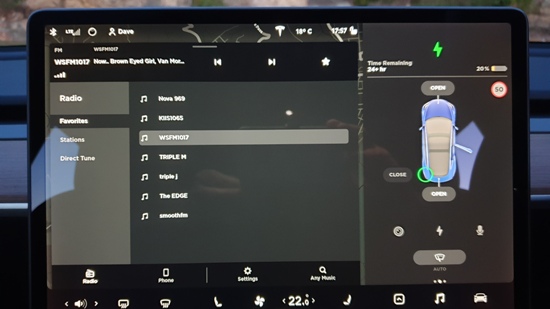 There is a form of voice activation embedded in the car as well. One form of usage is to ask the navigation system to take the car to a final location. There are also a range of games which cannot be accessed while the car is in motion, however a Toybox icon brings up various forms of entertainment, including “Emissions Testing”…five year old girls and boys will love it. As will most adults. Dogs will like the Model 3 as well, as Dog Mode for the aircon is available. This enables cooling air whilst the car is switched off. The screen will also display, as Tesla says: ” “My owner will be back soon. Don’t worry! The A/C is on and it’s [temperature]”

To add to the difference is something the automotive industry will no doubt see more off. There is no key. There is a card or two called Concierge Card, however the main method to gain access and perform other operations remotely is via a smartphone app. Once paired, the car reads the presence of the phone, and will lock the car from a distance of between five to seven metres.

That same app provides charging information, location of charging points, and remote operation of the locking mechanisms including the charge port flap on the rear left corner. Those cards, otherwise, grant access via a centre console reader, or one in the B pillar behind the driver. 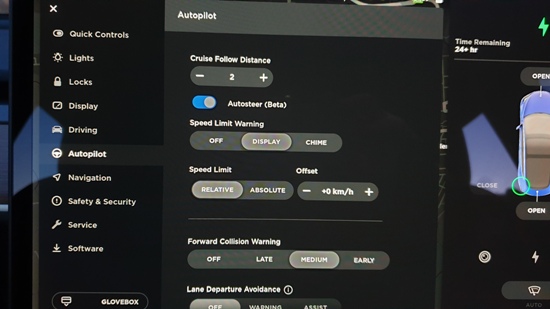 The display screen default is the Google maps image to the left and centre, with the right showing the drive display. Sensors and cameras around show a computer generated image showing the car and its location relevant to the road and surrounding traffic. To change the air-conditioning settings, it’s a form of pinch and swipe on a graphic that shows the image of the slot. Some of the information on the screen is laid out in response to Tesla owner feedback. To the bottom right are icons that depict the car settings, audio and for access to ancilliary actions. These are here as a result of that feedback, with the heating for rear and front window moved to the far left as these were icons, drivers said, are far less used therefore don’t need to be close to a right hand driver.

Although seating is designed to seat five, it’s best used as a four seater. There are a pair of USB ports up front, and a pair for the rear seats. 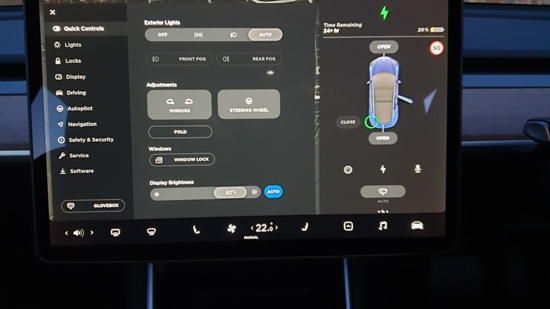 Out on The Road It’s: Dare we say, typical Tesla. What that means is devastating performance both from a standing start and in rolling acceleration. Tesla’s 0-100km/h time is quoted as 5.6 seconds for the Standard. That feels slower than real world seat of the pants feedback would suggest. There are no official figures for rolling acceleration but again, seat of the pants says quick.

The Tesla Model 3 Standard Plus was taken on a drive loop from the lower Blue Mountains to a town in the NSW Southern Highlands named Robertson, to Bowral, then back. Charge used to arrive at Robertson was over 50%. However it needs to be said that this involved some noticeable uphill runs, along with the subtle climb that the main southern highway has to that area. There are no superchargers in the area and typing in “destination chargers” in the navigation showed one to be a charge plug unsuitable for Tesla ports. Tesla Destination Chargers revealed one at a highway inn on the outskirts of Bowral.

Robertson itself is “famous” for its pie shop, and rightly so. As it’s an ideal spot to stop between Wollongong, Kiama, Berry/Nowra, and the Bowral/Mittagong towns, it’d also make an ideal spot for a Tesla Supercharger. The one sourced was of the maximum 22kW variety, with an hour or so to charge in an extra 20% to be on the safe side to get home. Once the destination was typed in, it shows estimated time of travel and estimated charge left. Both were virtually spot on, with just 30% used on the return journey.

The ride quality and steering is superb. Model 3 could be seen as the sports car entry in the Tesla range, and even though the Standard Plus has a slightly higher road clearance height, it’s still clearly low enough to provide a sense of sports car. The chassis and suspension work well to allow a sporting minded driver to push it top its limit, and in conjunction with the superb grip from the Michelin rubber, means that it really hangs on at velocities in turns that some others would need to be at five to ten kilometres per hour, maybe more, slower. This is also where the brilliantly balanced brake pedal came into its own. Although the regeneration system can slow the car well enough in some circumstances,t the pedal provides ample communication when needed.

It’s a beautifully supple chassis too, with bump absorption on the very irregular back roads brilliantly sorted. Actual road noise isn’t fantastic on these sorts of roads, but once back on the smoother tarmac, the only really noticeable noise was wind.

Charge levels, well, they’re the same as fuel usage. Go hard and that estimated range disappears quickly. Go gently, and range gets better. There is adjustable settings for the regenerative system, and this seemed to vary in grip depending on whether there was a slop to go down or coming up to a stop sign on a flat road. To gauge the driving style, the touchscreen shows the same sort of information the Model S and Model X have on their driver’s screen. Yellow for positive energy usage, a black like for when the car is using the battery.

When it comes to the autonomous service, the Tesla Model 3 relies on sensors and cameras to read the road ahead and around. A small steering wheel icon comes up on the screen, and one or two pushes downwards on the right hand stalk. This brings the car to full autonomous, with steering and active cruise control (with distance settings also adjustable) fully involved. However, it will still warn the driver that hands on the wheel should still be the norm.

Left to its own devices, the steering will follow the roadside markings without issue. It will not work if there are substantially degraded or non-visible markings to be read. The motions are a mix of fluid and jerky, with longer corners having the wheel move minutely, section by section. Most of the drive though was under human control.

At the End Of the Drive. Tesla had promised a cheaper car for some time. It’s here. In Standard Plus trim, it’s an ideal city based vehicle. Ride quality, handling, a basic features list, make for an $81K electric car that can be held up, finally, as a worthy option compared to petroleum fueled cars. The inside happily swallows four, has a boot big enough to deal with a family, and isn’t unattractive to look at.And although the outright electric only competition is increasing, it’s still not a crowded market. For now, Tesla is still the leader.
Here is where more can be found.