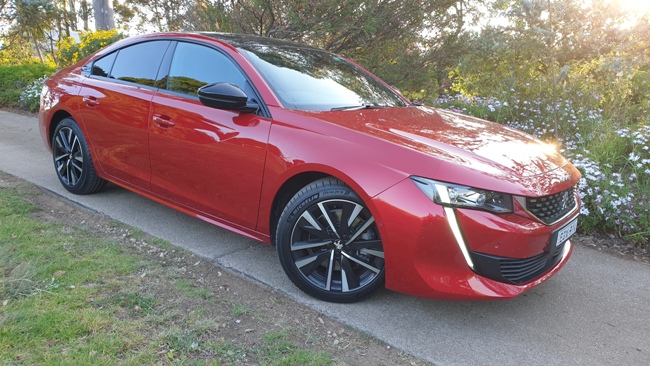 This Car Review Is About: Peugeot’s super slinky, super sexy, super underrated 508 sedan/fastback/hatchback. It gets the three names because it has a powered rear hatch and has a profile that blends a sedan and fastback style. Any way you look at it, the 508 is a truly stunning vehicle to clap the optics on. There is a Sportswagon variant as well for those needing that extra cargo space.

How Much Does It Cost?: At the time of review it’s $56,990 driveaway. Peugeot’s website, at the time of writing, indicated a price of over $62K normally. 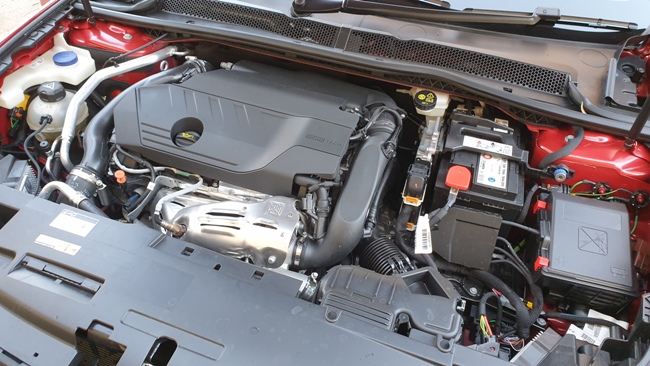 Under The Bonnet Is: A 1.6L petrol engine with turbo oomph. There is 165kW and 300Nm @2,750rpm available, and drive gets through to the front wheels via a smooth-as-silk eight speed auto. Our time with the 508 coincided with a drive to Bega on the New South Wales south coast. Economy is excellent at 6.4L/100km from the 62L tank and this was with four aboard, luggage, and a pooch. Peugeot is one of the rare companies that provides a 0-100 time and for the fastback it’s 8.1 seconds. Top speed is electronically limited to 250kph.

On The Outside It’s: An eyecatcher, especially in the glorious Ultimate Red metallic which is one of nine external colours available as a current no-cost option. The front features blade style LED driving lights and indicators, self-leveling LED headlights, and starts the flowing look that embodies French chic. Subtle crease lines roll back from the bonnet to the windscreen base, and from the forward flanks along the frameless doors. A three claw rear light is joined to the body via a sharp crease that brings the roofline to the powered hatch.

Michelin supply the 235/45 ZR Pilot Sport4 rubber on black painted machined alloys. The design is based around five triangles and the combination of machined metal that stops short of the centre hubs looks fantastic against the red. The roof looks all black however it hides a sunroof. 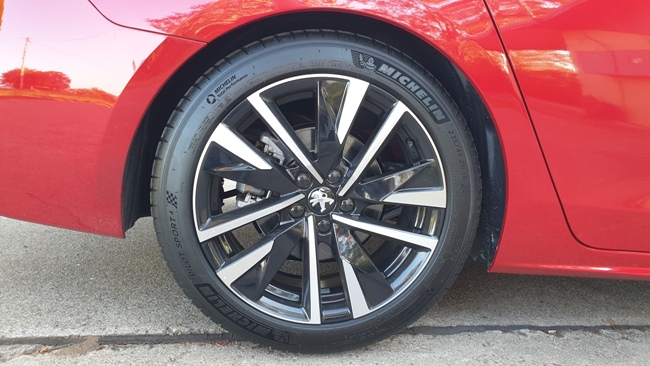 The hatch opens via a hold-and-press tab on the keyfob, a double-tap button inside, a press of the Peugeot lion emblem, or a somewhat fussy kick under the left rear section of the bumper. It’s not always successful and repeated tests saw the shin barked on the bumper more than the procedure worked.

Up front and “magic wash” wipers ooze rather than spray the cleaning fluid; it takes a moment for the nozzles to flow but they’re far more quiet and efficient. Just as efficient is the auro high-beam feature, dipping and raising the stronger light as a sensor dictates from the outside readings.

On The Inside It’s: A truly beautiful place. Pliant Nappa leather with diamond shaped stitched shaping, a floating centre console with smartphone charge pad and two USBs, and Peugeot’s cool looking 12.3 inch i-cockpit greet passengers with a warm ambience. There is two position memory seating for the driver plus eight-way adjustment and massage for both front seats, heating is standard, and the support underneath and for the sides is sportscar-like. There’s a nice touch from the frameless windows that drop slightly and raise automatically as the doors are opened and closed. 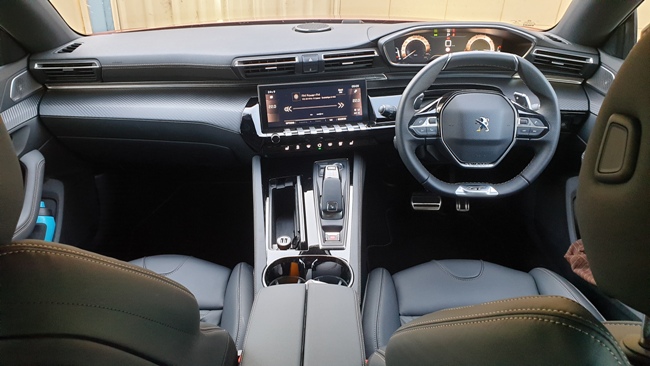 Basic controls such as satnav, aircon, audio etc are activated via soft touch and classy looking alloy look tabs below the touchscreen.  Under these and wrapped in piano black are the supplementary aircon controls. On top of the floating console is a rocker switch to engage different drive modes. At the end facing the rear seat passengers are another pair of USBs and airvents. 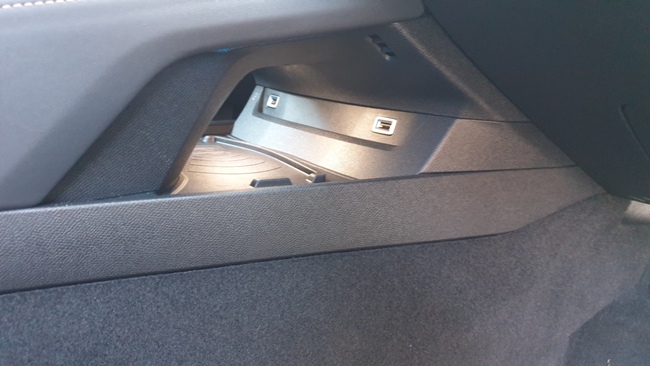 There are a couple of hidden tricks for the cabin too. The child locks are disengaged via a tab on the driver’s door’s armrest, not via the setup in the 10.0 inch touchscreen. As our time with the 508 coincided with a swap to daylight saving, a change to the clock was needed. This is done not by tapping the time display itself, but using an options screen via a Settings icon.

Subtle mood lighting is seen in the dash and centre console drinks holders for a classy touch, and the classy look extends to the choice of display on the i-cockpit screen. There are Dials, Minimalist, Navigation and more to choose from, and activated via a press and roll of the selector on the left side of the steering wheel’s arm. here is also the volume control for the DAB equipped audio system, with legendary French speaker manufacturer Focal providing the outlets. 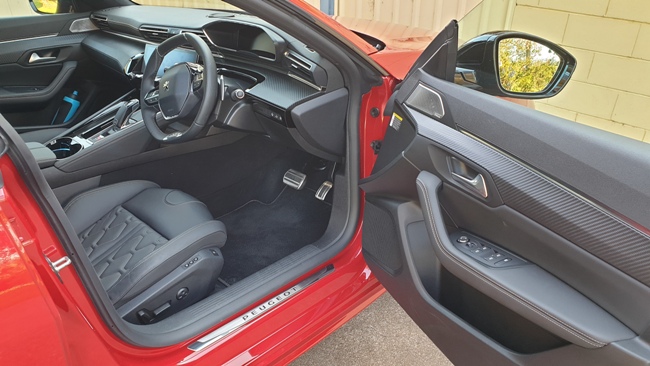 It’s not all beer and skittles though. That sloping rear roofline does make it a little tight for taller passengers, with anyone knocking on six feet probably close to nudging the noggin. Rear leg room is also adequate but again verging on tight for the taller. The cargo space too feels somewhat compromised thanks to the slope of the hatch and a high floor yet offers 487L to 1,537L. 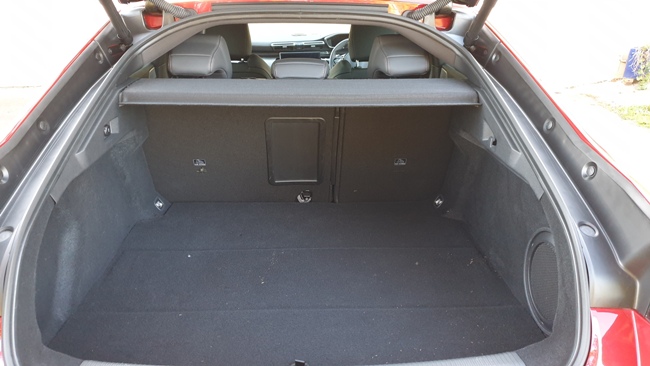 On The Road It’s: An absolute delight and performance utterly belies the 1.6L’s 300Nm. Around town it’s as easy to drive as expected, with the eight speed DCT on tap at all times and mostly lacking the yawning gaps found in other similar transmissions. The gear selector is as pistol grip style with a button on the right side being pressed and a rocker forward or backwards to engage Reverse or Drive. Cog engagement is far better than that seen in other vehicles and allows forward motion to be both quick, and importantly, safer.

It’s a real cruise mobile, helped by utterly sublime suspension that has each corner rolling over its own section of road without interfering with the other three. Magic carpet in feeling, it dealt with the suburban roads just as easily as the highways, especially those south of Canberra. It’s the ideal mix of quietly wafting whilst being ready to attack like a sports machine. The steering was better when the Lane Keep Assist was disengaged, as this was a little too aggressive in re-centreing the 508 GT. Weight was virtually perfect and torque steer negligible. Braking was instinctive in feedback too.

It’s in its highway prowess that the 508 GT really sang, with that fuel economy a great starting point. However it’s the unexpected flexibility of that seemingly too small 1.6L that sold its potential and won us over. It’s unstressed as a highway goer, with the rev counter just under 2,000rpm. When needed to get angry, it launches the 508 forward with unexpected and wholly welcomed verve and vigour, allowing legal and safe passing to be safer than expected. 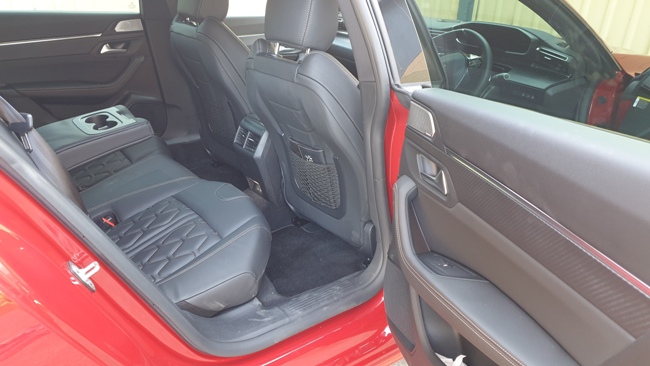 On one long, straight, and vision perfect for overtaking road, in a line of traffic behind a few caravan-toting 4WDs, the right moment was selected to indicate after checking for rear traffic, and suddenly seeing the front of the line before indicating again and pulling in. For a car of its overall size and with the payload aboard, it’s far, far better than expected and makes long drives a safer proposition.

Easing off and going uphill, the numbers on the digital face roll back rapidly, and there’s only the gentlest of squeezes of the accelerator to settle the vehicle and have it  back on the pace. Through all of this, the suspension is supple enough to be luxury when required, and can be punted with sporting intent just as easily too. Peugeot have hit the sweet spot with the 508’s ride and handling.

At The End Of The Drive: The Peugeot 508 GT fastback is a truly underrated car. It will cosset you in silent comfort and take you to within sight of dedicated, and pricier, sports oriented vehicles. There is plenty of space, plenty of tech and safety, and plenty of that underlying, restrained performance, to not just delight, but surprise in the best way possible.

It’s the car that surprised us with it’s all round ability, and in a shrinking sedan market, deserves better consideration. The Peugeot 508 GT is that virtually perfect blend of a luxury car that eats up highway miles whilst offering the iron glove performance of a dedicated sports hatch. Yes please, sign me up. Get yourself into one here. 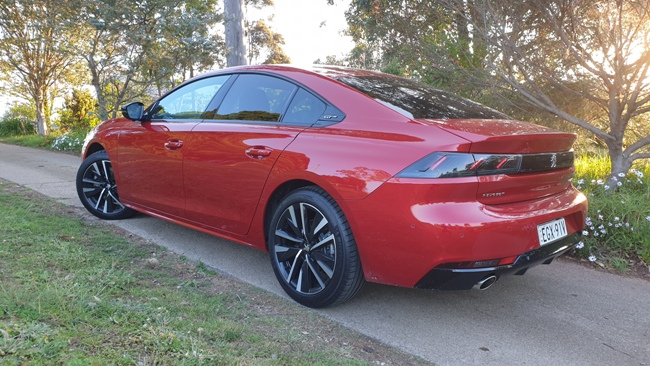