This Car Review Is About: Isuzu’s substantially overhauled D-Max, specifically the 4×4 capable and top of the range X-Terrain. It heads a solid list of 4×2, 4×4, cab chassis, extended cab, and four door utes, all with the same 3.0L diesel and six cogger manual or autos. Info on the range and engine updates can be found here. 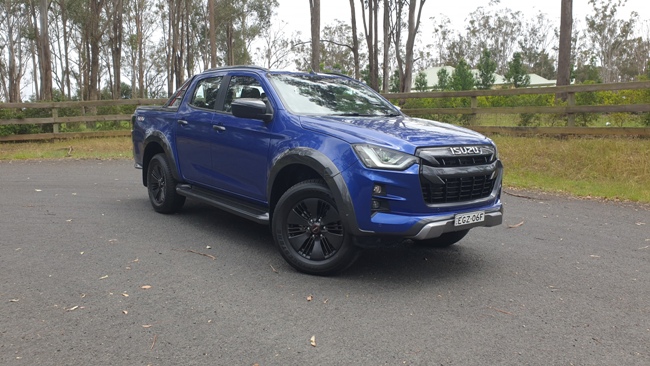 How Much Does It Cost?: At the time of writing, Isuzu have a drive-away price tag of $58,990. Then there is the extensive list, over fifty, of options available.

Under The Bonnet Is: A revamped 3.0L diesel and six speed auto, driving a switchable two or four wheel drive system, with low range and a locking rear differential. Peak power is 140kW, but it’s the peak torque of 450Nm from 1,600rpm to 2,600rpm that does the important stuff. 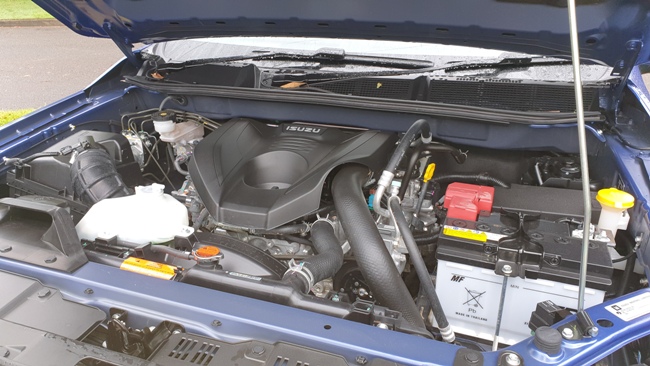 On The Inside It’s: A considerable step up from the previous model. There’s a more luxurious feel, a better look, yet some noticeable omissions.

Our time with the X-Terrain coincided with Sydney’s notoriously fickle late spring weather. Temperatures varied by twenty degrees Celsius, so the absence of heating and venting for the leather appointed seats was striking. However, they’ve been redesigned so there’s more sense of sitting in, not on, and the support level laterally goes up as a result. However, only the driver’s seat is powered for adjustability.

There is also no smartphone charge pad, only the driver’s windows switch is one touch, and the DAB tuner’s sensitivity isn’t the best going, with dropouts in areas no other vehicle we’ve tested and packing a DAB tuner having similar issues. Touchscreen size is 9.0 inches and Isuzu say it’s a pixel heavy count, at 144 pixels per square inch. The touchscreen interface for the audio needs polishing, as does the home screen look. It’s somewhat irksome that Isuzu has gone to a lot of trouble to “rebuild” the D-Max yet some basics have been overlooked. This is a top of the range vehicle, but yet… 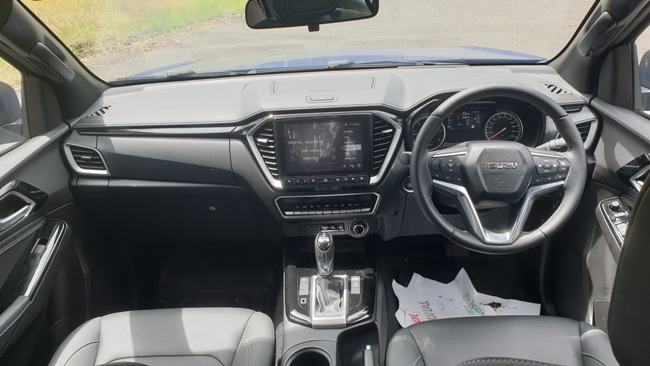 On the upside is the app connectivity and dash display design. It’s unlike virtually everyone else in look, yet it’s easy to read, and easy to use thanks to the steering wheel tabs that scroll information on a full colour LCD screen. The analogue dials are also clearly read, as are the no-nonsense tabs in a strip below the touchscreen.

The dash itself has angles built into the soft-touch plastics that evoke the angles of the exterior of the D-Max. This includes the creaseline from the left air vent down and across the double glovebox design, with an upper and lower split. There’s a lidded storage locker on the upper dash that has been improved, in the sense the locker mechanism works all the time, every time. The very handy cup holders that pop out from under the left and right air vents remain. 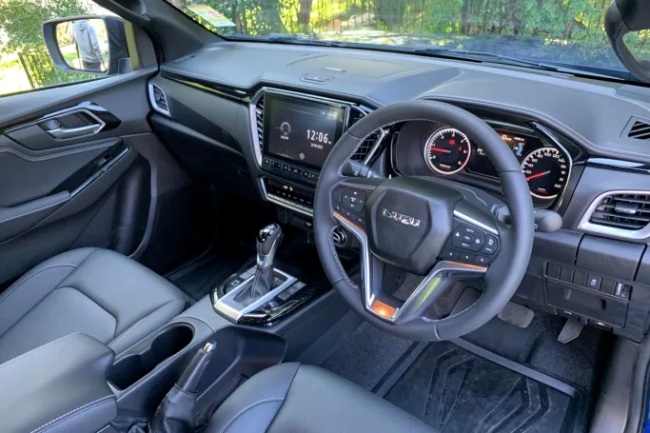 Drive is selected via a basic looking pistol grip lever, surrounded by piano black that echoes the material surrounding the touchscreen. The steering column is rake and reach adjustable. Leg room for the front seats is 1,075mm, with the rear seats in the four door ute at 905mm. 1,460mm shoulder room is what is found up front, meaning comfort levels in this aspect are high. Having rear seat air vents and a USB socket, plus a coat or shopping bag hook on the back of the front passenger seat raises the ante too. 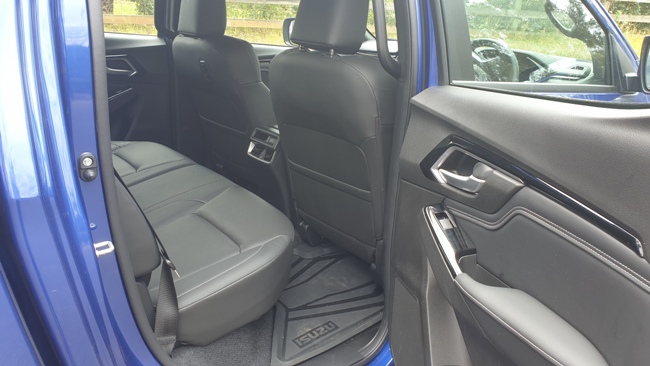 On The Outside It’s: Clad in a brilliant Cobalt Blue (on the test car), and there are three bespoke colours (two shared with the LS-U) including Volcanic Amber specifically for the X-Terrain. The most noticeable change from the previous model has been the enlargement of the grille which now extends further downwards, and the horizontals which have been flipped 180 degrees. The end plates now look more like teeth, adding an aggressive look.

Headlight design sees a slimming down of the design, and it brings a more assertive look, somehow evoking an eagle or a hawk. The rear lights also have been reprofiled, with a sharper overall look. The aggressive styling continues with strakes in the housing for the driving lights. On the test car was a lockable and rolling tray cover with the rear bumper, fitted with a towbar, having three steps to access the tray.

A stylish rollbar flows back from the roofline, and in a graphite grey plastic (with red highlights) it matches the roofrails and a pair of lower rear quarter aero-foils. Sidesteps and and wheel arch flares finish the package. 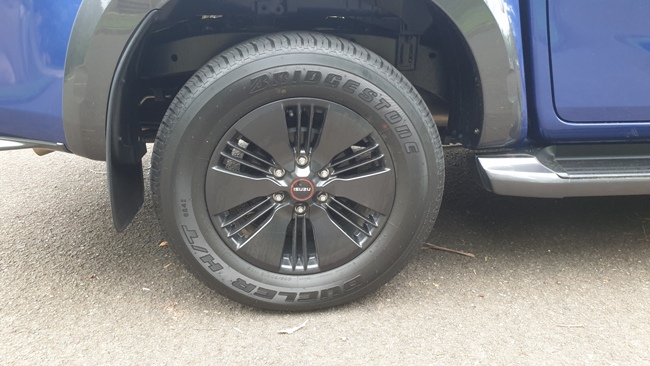 On The Road It’s: A little underwhelming in one respect. There’s noticeable understeer in 2WD, the Duellers lose just enough grip to squeal as they push wide too. The auto suits the engine’s characteristics much better than the six speed manual we tested in the SX recently.

Being a diesel, it does mean that the torque delivery at low revs means it’s an unstressed, easy going, highway spinner. That breathlessness comes in more for suburban driving, especially when pulling away from a set of traffic lights and trying to clear traffic. It’s not the zippiest of engine and gearbox combinations, nor is it the quietest, feeling a little lacklustre in comparison to, say, a Kia Sorento 2.2L and eight speed, which has a similar overall weight. Move away from a suburban stop sign and it pulls cleanly and effortlessly away for the speed zone as the throttle sensor keeps revs lower than accelerating from the aforementioned lights..

The auto is smooth, with up and downshifts mostly invisible. Downhill runs had the transmission holding gear, and again mostly worked well enough, changing up when a human also would have made the change.

Ride quality, considering it’s a commercial oriented vehicle, isn’t horrible. It’s well tied down for the most part, with nicely controlled rebound from the rear leaf sprung suspension, and a well balanced, tauter, double wishbone front end, in comparison. Steering weight is well matched to the ride too, with enough effort required to move the new electronically assisted steering to not feel over-light and thus lose steering feel.

Being four wheel drive capable, there are some big numbers for the angles. Get off road and an approach angle of 30.5 degrees, a departure of 24.2 degrees, and a breakover of 23.8 degrees make for some exceptionally capable dirt eating. 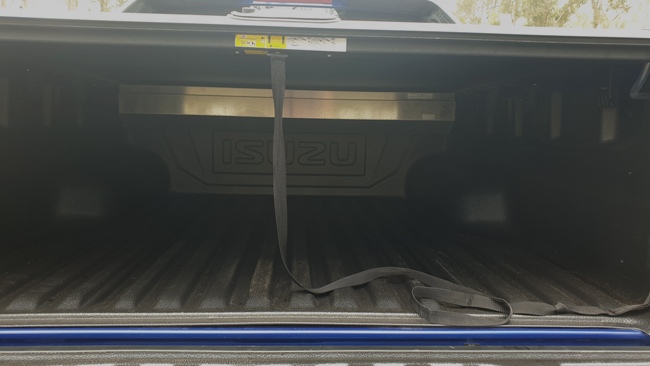 Something that stood out, and not entirely in a positive way, was the determination of what the Forward Collision Warning system felt to be a dangerous situation. There’s some recalibration to be done ans it would alert the driver to an object ahead however the brake was already being employed. At other times it would read an object that was turning left or right and therefore no longer a potential issue.

What About Safety?: There are now eight airbags throughout the cabin. In between the front pews is a centre mounted airbag, a segment first. A reverse camera is standard, along with parking sensors at either end. AEB is programmed for speeds above 10kph and has pedestrian & cyclist detection. Lane Keep Assist is standard and works best for speeds between 60 to 130. Forward-collision warning, lane-keeping assistance, lane-departure warning, blind-spot monitoring and rear cross-traffic alert are also fitted. 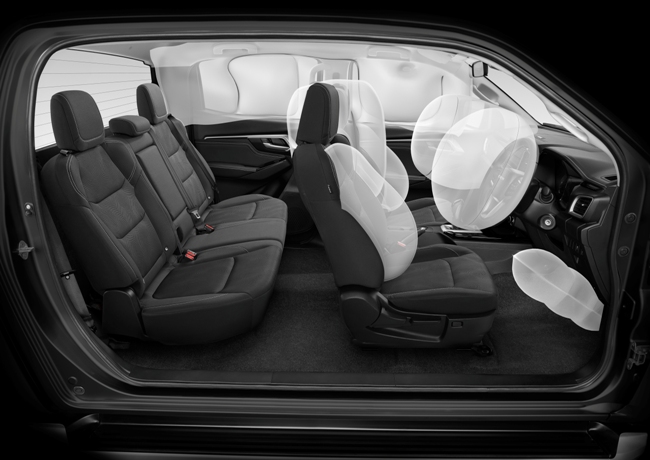 What About Warranty And Service?: Isuzu’s warranty offers six years or 150,000km, plus they’ll lob in seven years of roadside assistance provided services are done at the dealerships. Service intervals on the new D-Max remain 15,000km or 12 months, covered initially by a seven-year capped-price servicing program. This totals $3374 over that period, with the most expensive service (at 90,000km) costing $749.

At The End Of The Drive. It’s a much improved machine that Isuzu has given the marketplace, and the results are already flowing, with sales of the 4×4 version over 1,500 in November 2020. It takes on the HiLux and Ranger, and outsold the Triton too.

It’s a better looker, the interior has a more upmarket feel, but it still needs some more polishing in a couple of areas for features seen in other marques but not here, such as heating/venting for the seats, or perhaps offering electrical adjustment for the front passenger seat, not just the driver’s. As an overall package, it’s a better option that before, and the coming months will tell the tale sales wise. It looks the part, and pricewise it is poised to take aim at the two above it quite nicely. 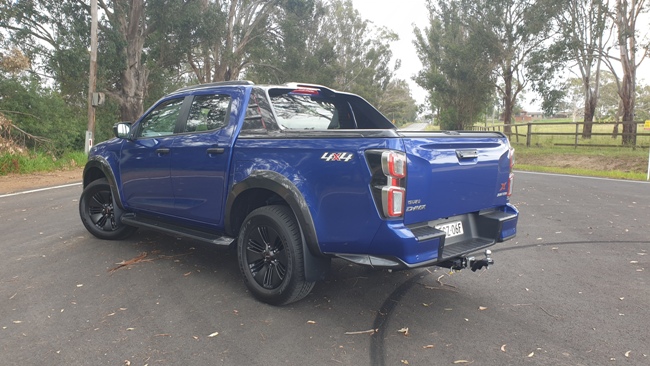